Statistics you are interested in: simple linear regression – part 3

Posted on February 12, 2019 by Joanna Diong Leave a comment

In the first and second posts of this series, we performed simple linear regression of a continuous outcome on a single continuous predictor, but we also learned it is possible to include binary or categorical predictors in such regression models. How is this be done?

The hsb2.csv dataset we have been using also contains the variable female where male participants are coded 0 and female participants are coded 1. We could perform a linear regression of science scores on sex. The slope of the line shows the change in science scores for a 1 unit increase in sex. In this example, it shows whether female participants scored differently compared to male participants. Because the predictor variable is binary (i.e. male vs. female), performing linear regression of a continuous outcome on a single binary predictor is the same as performing a t-test. We perform the regression and plot the between-group difference and 95% CI. Python code to perform the regression is shown, as well as individual subject data in Figure 1: 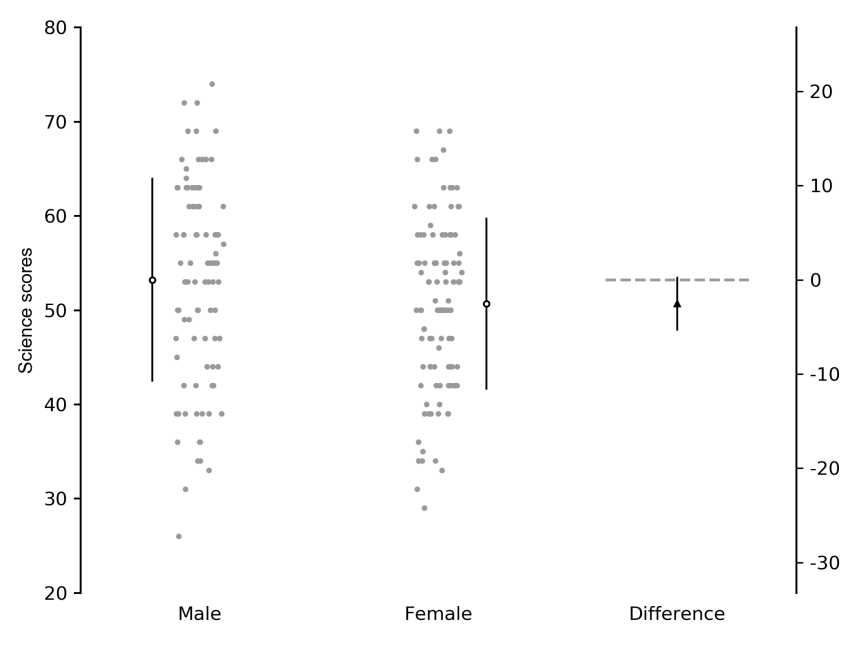 Because males were coded as 0 and females as 1, the Intercept coefficient is the mean science score of male participants, and the slope coefficient is the difference in mean science scores between female and male participants (direction: female – male). The 95% CI of the difference crosses 0, which shows there is no difference between male and female scores: the mean difference between groups is -2.53 points, 95% CI -5.29 to 0.22 points. The width of the confidence interval shows the precision of the estimate of the between-group difference. Loosely speaking, we can say that the between-group difference varies from -5.29 points to 0.22 points, 95% of the time. Confidence intervals are more useful than p values because they show how much the estimate of the between-group difference “jumps around” if the study were repeated many times; that is, the confidence interval allows us to infer the findings in subjects who were not part of the study’s sample.

We might think that some of the variability in science scores is explained by reading scores, so how can we account for this variability? This is done by adding reading scores into the model as a covariate. A covariate is simply another predictor or x variable in a statistical model, and is named because the predictor variables vary together; they co-vary.

In the model below, you will notice that the female predictor is binary, but the read predictor is continuous. Linear regression models can handle continuous and categorical predictors simultaneously (Try doing that with an ANOVA!). We also include some code to write the regression output from both models to the text file results.txt, which is stored in the working directory. Individual subject data and summary statistics are shown in Figure 2: 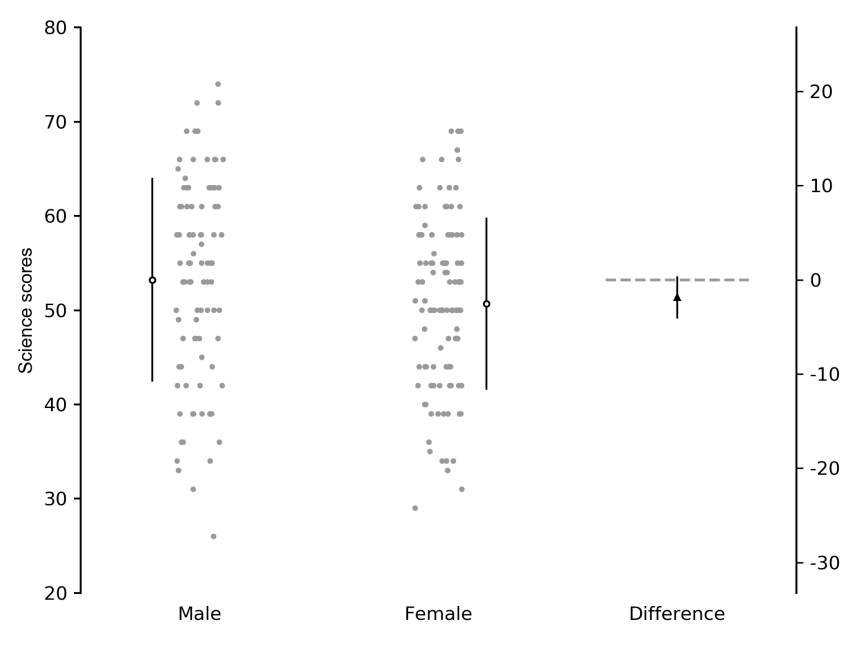 We are interested in the coefficients for Intercept and female, not for read because that is simply a control variable. In this example, we see that adjusting for reading scores has narrowed the 95% CI, but the overall conclusion is the same: science scores in males and females are no different, adjusting for reading scores (mean difference -1.88, 95% CI -4.03 to 0.28).

We performed simple linear regression of a continuous outcome on a binary predictor, with and without covariate adjustment.

Finally, we saved the output from the regression models to a text file.