When a motor neurone fires, the action potential travels from the axon to the muscle fibre and causes the fibre to contract (twitch), producing a tiny force. When many motor neurones fire, the action potentials produce tiny forces in many fibres, and the addition of all these forces (summation) produces a muscle contraction. Surface electrodes are usually used to detect the summation of action potentials from many motor neurones through the skin. Fine wire electrodes can be inserted into a muscle to detect the activity from several fibres near by that are part of the same motor unit – this method demonstrates the electrical discharge pattern of the motor neurone located in the spinal cord. Here, we will focus on processing and analysing muscle electrical signals from surface electrodes (surface EMG).

Let’s use Python to simulate some simplistic, non-physiological EMG data obtained from two maximal voluntary contractions of a muscle: 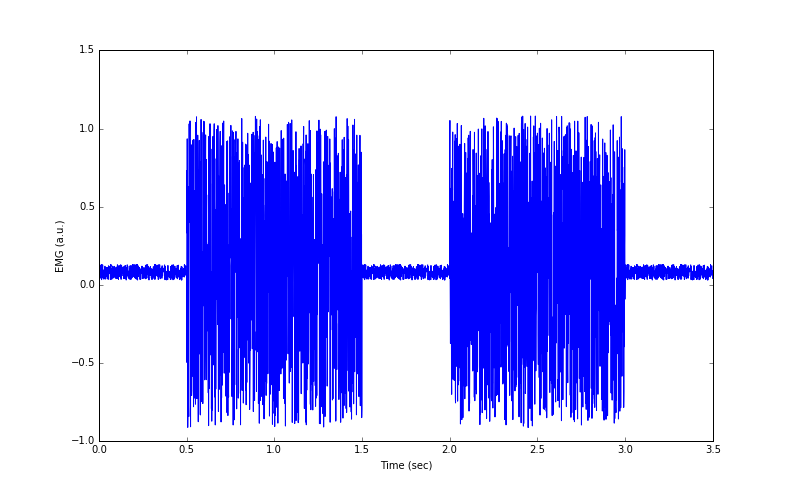 The code that generates Figure 2 is:

Figure 2 shows simulated data of two EMG ‘bursts’ – the spikes are collections of action potentials from many neurones firing to stimulate muscle fibres. In the next part, we will discuss how the data were simulated, some of the problems with these EMG data, and what can be done to fix them.